A store near my home is known for all things chocolate: hand-crafted candies of all shapes and sizes, and desserts, and beverages, a chocoholic's field day. I'm unable to pass by the store without stopping in, if not to buy, at least to drool; but usually to buy. Although specialty chocolates are more captivating than a conventional candy bar from the supermarket, chocolate is chocolate and I'd never turn any of it down. We know from experience about the delectable nature of chocolate, but what of its benefits? 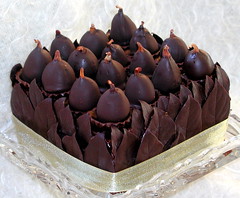 This foodstuff has been prized since the Olmecs - preceding the Aztecs and Mayans - discovered the beans, as early as 500 BC. The ancients believed that eating the fruit of the cacao tree (pronounced ca-cow), the beans from which chocolate is made, conferred wisdom and power. I can't attest to the wisdom part of it. When I eat chocolate, I don't invent the next computer program or solve a family crisis. All I think about is my next bite. As to the power, it was the royals and priests more than 2500 years ago who were the ones permitted to indulge in chocolate. Makes me wonder which came first: the power one gained from eating chocolate or VIPs who were powerful to begin with.

According to Dillinger, et al, in the Journal of Nutrition, the ancients used chocolate to live longer, lessen fatigue, reduce angina and palpitations, strengthen the heart, and to treat stomach disorders, among other medicinal uses. But what does modern science say about chocolate?

Polyphenols, the compounds in cacao beans, are flavonoids, antioxidants. Antioxidants counter the negative effects of free radicals, the molecules connected with heart disease, among other ailments.

The USDA Agricultural Research Services reports that some, but not all studies, link flavonoid consumption to lower risk of heart disease. While their report noted fruits, vegetables, tea and wine, Penn State's Dr. Penny Kriss-Etherton summarized the scientific literature and reported several health benefits of cocoa and chocolate. Cocoa decreases platelet aggregation, less than, but similar, to the effects of baby aspirin. There is also a modest, yet favorable effect on mild hypertension, reducing both systolic (the high reading) and diastolic blood pressure, (the low reading); and chocolate decreases LDL, the bad cholesterol, and increases HDL, the good cholesterol. She also added that chocolate benefits blood glucose levels by enhancing glucose uptake.

University of Copenhagen researchers compared the effect of dark and milk chocolate on appetite. The subjects fasted for 12 hours prior to eating 100 grams of chocolate: dark chocolate one session, milk chocolate the next, with caloric content reportedly equal in both. Two and a half hours after eating the chocolate, they were offered as much pizza as they wanted until they felt satisfied. When compared, the prior ingestion of dark chocolate resulted in a subsequent 15% decrease in calories eaten, compared with ingestion of milk chocolate. Dark chocolate seems to satisfy hunger. Perhaps it's the bittersweet taste.

Ingesting cocoa could help prevent sunburn (although probably not much more than sunblock) and reduce sensitivity to light, according to Beth Israel Deaconess Medical Center (BIDMC). They also reminded readers that chocolate contains caffeine and theobromine, assumed to have side effects common with coffee and black tea such as heartburn, gastritis, insomnia, anxiety and heart arrhythmias. Also, chocolate isn't always good when taking certain medications such as MAO inhibitors, stimulants such as Ritalin, and drugs for a variety of other health problems. No doubt due to its caffeine content. Accordingly, chocolate-lovers should check with their health care providers.

How much chocolate is enough for health? Taubert and colleagues reported in the Journal of the American Medical Association that an improvement in hypertension occurred by ingesting as little as 6.3 grams/day of dark chocolate, equaling 30 calories. BIDMC reports that dark chocolate has a significant amount of flavonols, compared with white chocolate, which has little or no flavonols.

Read the labels on chocolate and decide for yourself how much you want to eat, but do so in moderation, substituting it for other foods you normally eat that are similar in calories and fat. Otherwise unwanted weight gain can result.

Other benefits are psychological and/or social. Kriss-Etherton indicated that fifty-two percent of US women say that eating chocolate makes them happy. I'm one of them. You can forget your troubles for a little while, and indulge. We love a gift of chocolate, a symbol of love, friendship, or neighborliness. What would Valentine's Day, Halloween, or a simple, spontaneous gift be without it? And the fact that it has been found to be good for us makes it all the better.

Authors Bio:
Gerri is an RN who taught health education to college students, health promotion to patients, and wellness to adults and school-age children. She's had many articles published in nursing and health journals. She has written health education brochures and also writes fiction, sometimes with a health-related theme. One of those stories was nominated for a Pushcart Prize.